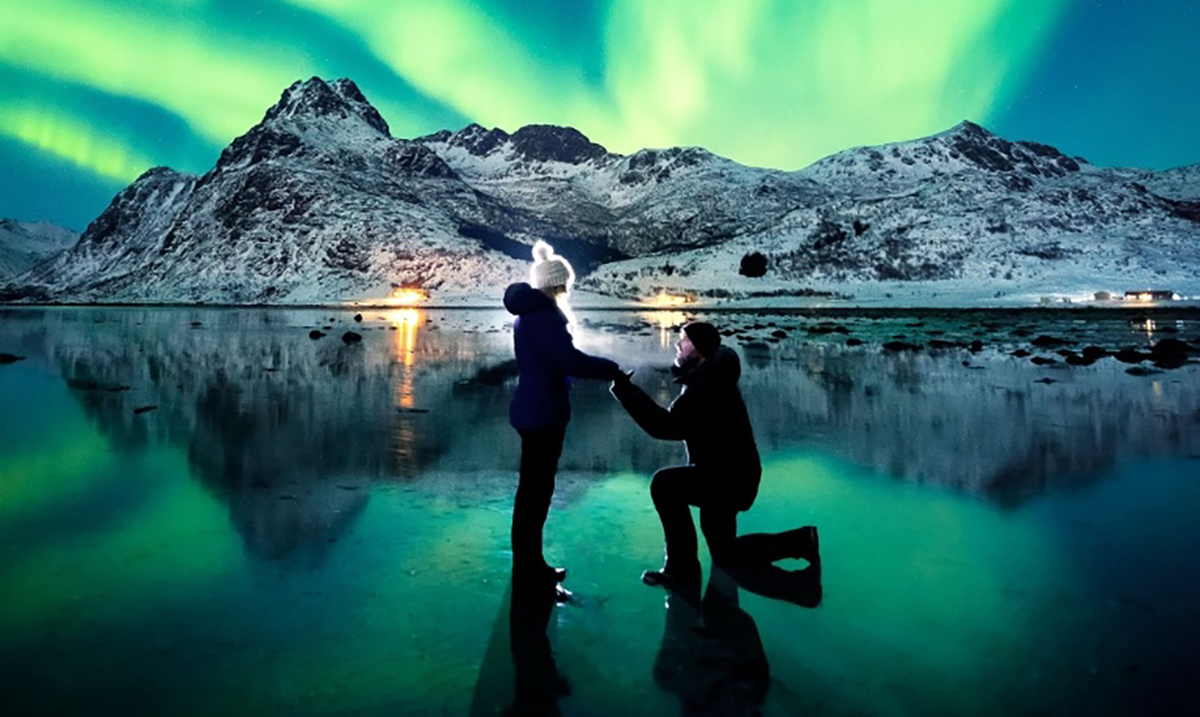 Photographer Proposes Under the Northern Lights, Achieves the Most Spectacular Proposal Photo Ever

Getting engaged in the digital age requires a lot more effort than it used to, particularly if you are trying to stand out among all of these wonderfully creative proposals that routinely flood our timelines. Thanks to social media, it is possible to witness all kinds of marriage proposals, from the most disgusting to the sweetest ever.

But nothing can beat this proposal in terms of spectacularity. It helps that both the future groom and bride are landscaping photographs in Australia. If there was ever a doubt in anyone’s mind on how to propose under the Northern Lights, photography couple Dale Sharpe and Karlie Russell’s dreamy photo pretty much nails it.

According to Cosmopolitan, “He first tried to propose during a trip to Iceland nine months earlier and had hidden the ring inside a bottle of hand cream, Daily Mail Australia reports. But when the couple, who are landscape photographers, found their luggage was over the weight allowance, Karlie threw the moisturizer — and the $4,000 ring that Dale had hidden inside — into a bin.”

“I didn’t know until a week weeks [sic] after when we were in Iceland and I was looking everywhere for the ring,” Dale told the newspaper. “I asked her where the moisturizer was and she told me she threw it out in the airport.”

After their romantic venture did not actually happen, Dale saved up to buy a new ring for a two-month visit to the Arctic Circle. While he had planned to ask Karlie to marry him on the day of their seven-year anniversary, the stunning display of the Northern Lights made him change his mind. Can you blame him?

“It was the most amazing display of color in the Aurora that we’ve ever seen,” Sharpe said. “I wanted to take full opportunity and make it happen at its absolute best. The moment was right, it felt good, so why not.”

Lofoten, Norway… ______________________________________ WE’RE ENGAGED! What a better way to propose than in the heart of the Arctic Circle under the Northern Lights. It’s taken a few years to plan but I always had this moment in mind & it seemed fitting as we are both landscape photographers who share a passion for photographing the aurora. Originally I was going to propose in Iceland last year but unfortunately Karlie decided to discard my secretly stashed ring (yes, that actually happened ? lol, we were trying to cut weight on a connecting flight from the Faroe Islands). Fortunately though my plan worked & tonight the aurora was firing in one of the most incredible displays of colour we have ever seen. I tricked Karlie into believing we were shooting a selfie & used a torch to light us up for the image. Much to her shock, it wasn’t any normal selfie, and much to my shock, she said yes! ? This is a single image that was taken during the proposal. And now we may not have any of our own images up hanging on our walls at home…we may however, make an exception for this one. ? Dale & Karlie