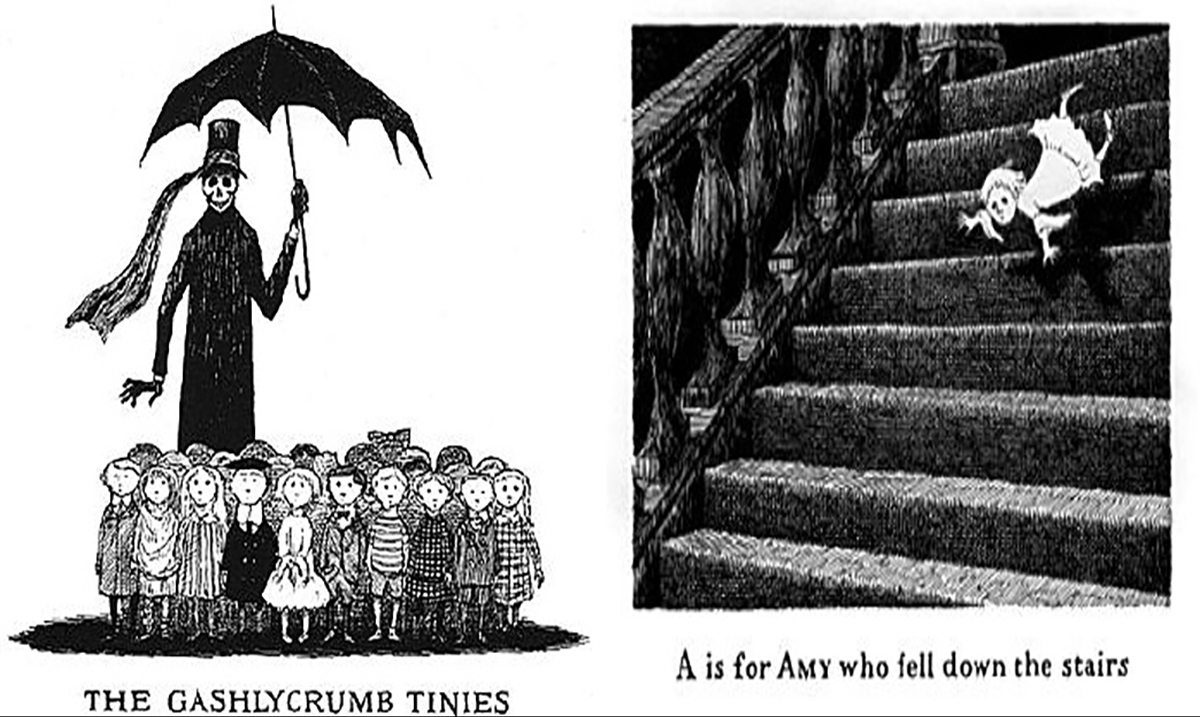 Published in 1963, Edward Gorey’s: The Gashlycrumb Tinies is a delightfully macabre ABC book is in a category all own its own. While it may have been oddly placed in its time, this unique satire hilariously, yet darkly explains the deaths of 26 individuals who are each represented by a letter of the alphabet.

Gorey was not only the writer of the book but also the illustrator. Many of the illustrations, if not all, appear to be the inspiration that motivated the likes of Tim Burton. While we can’t say for sure, it would completely make sense if they were. Throughout the book, Gorey uses his hallmark pen-and-ink drawings to very vividly provide you with unsettling scenes that are reminiscent of the Victorian era.

Of course, it’s not your typical nursery rhyme. However, it’s honestly, and disturbingly just as catchy. Beginning with, “A is for Amy who fell down the stairs. B is for Basil who was assaulted by bears…..”
the book takes you in a much different journey than any other child’s book.

And while the novel bears an obviously gloomy tone, Gorey had this to say when he was referred to as gothic,

“If you’re doing nonsense it has to be rather awful because there’d be no point. I’m trying to think if there’s sunny nonsense. Sunny, funny nonsense for children — oh, how boring, boring, boring. As Schubert said, there is no happy music. And that’s true, there really isn’t. And there’s probably no happy nonsense, either.”

Categorized by volume, Gorey managed to put together a four-set composition between the years of 1953-1987. Included in those volumes were over 100 books, that held titles like “The Doubtful Guest”, “The Curious Sofa”, “The Beastly Baby”, “Gorey Stories” and much more aptly named books.

Throughout all of his work, Gorey experimented with various forms of surrealist art, wordless books, tiny-sized books, as well as books that were filled with strange and inanimate objects. Staying true to his nature of originality, he created a treasure trove of alternative children’s books that will forever live in infamy.

And as a special treat, you can watch the Gashleycrumb Tinies animated here.